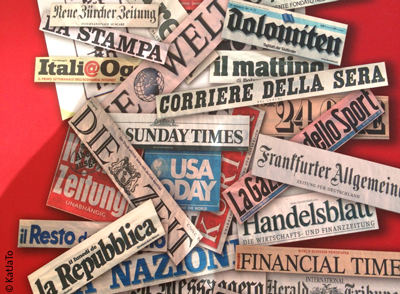 Subscribe to our news feed, or join the Econ newsletter service, to be the first to know about our upcoming events.

Franziska Weiss, PhD student at the Department of Economics, has received the "SSES Young Economist Award 2013", awarded by the the Swiss Society of Economics and Statistics for the best paper of a young economist less than 33 years old. The prize has been awarded in recognition of her paper:
"Non-homothetic preferences and industry directed technical change"
(with Timo Boppart)

Dominic Rohner has been awarded the Exzellenzpreis für praxisrelevante Entwicklungsforschung from the Research Committee on Development Economics of the Verein für Socialpolitik. The award was granted for the paper „War Signals: A Theory of Trade, Trust and Conflict" (co-authored with Mathias Thoenig, University of Lausanne and Fabrizio Zilibotti, University of Zurich), that Dominic Rohner wrote while being a post-doc at the Department of Economics of the University of Zurich. Congratulations!

The CentER for Research in Economics and Business at Tilburg University, the Netherlands, has published the newest version of its worldwide ranking for economics institutes. Based on the research contribution in the top-5 journals from 2008 - 2012, the University of Zurich ranks 5th among the best economics schools in Europe.

The academic economic profession attaches a key role to peer-reviewed published research. Arguably more than in any other discipline, economics has an informal ranking of publication outlets which distinguish between "top five general audience journals" (American Economic Review, Econometrica, Journal of Political Economy, Quarterly Journal of Economics, Review of Economic Studies), top second-tier general audience journal, top-field journals, and other peer-reviewed journals. While the exact within-group ranking is subjective, there is a clear ranking between groups and an equally clear discontinuity between top-5 journals and the remaining reviews. Top-5 journals are a main criterion for appointments and promotions in the best American and European institutions, for instance. Which journals are the five most attractive outlets is undisputed in the profession. For these reasons, the number of publications in top-5 journals is a good measure of excellence in research. It is more precise and less controversial than any measure based on a broader set of journals that would tend to favour the quantity over the quality of research.

Using the database made public by Tilburg University (https://econtop.uvt.nl/rankingsandbox.php), we constructed a ranking of the European Universities based on the number of top-5 publications between 2008 and 2012. Here is the result:

The calculations in the Tilburg Ranking are based on the stated main affiliation of the researchers at the time of publication. This means that the success of researchers currently at the University of Zurich may be understated due to the fact that many active researchers only joined the department recently. It is interesting to check whether the top-5 criterion gives a reasonable ranking for US universities. The top 10 institutions are Harvard, M.I.T., Chicago, Stanford, Berkeley, Northwestern, Columbia, Yale, Princeton, and New York University. These economic departments are regarded by most researchers as the ten strongest departments in the US.

The database of the Tilburg Ranking covers publications in 70 leading economics journals since 2004. The ranking provides a standard Top 100 of economics schools, based on a subset of journals in the database, over a 5-year period. Even if you do not focus on the top-5 journals, one can say that the University of Zurich has achieved a top position, ranking 8th among the best economics schools in Europe.

Ernst Fehr has been awarded for his pioneering research on the role of fairness in markets, organizations, and in individual decisions. The ceremony took place on April 9, 2013 at the Gottlieb Duttweiler Institute in Rüschlikon in front of 300 invited guests.
The politically independent Gottlieb Duttweiler Prize is awarded at irregular intervals for outstanding contributions to the community. Previous prize-winners include Wikipedia founder Jimmy Wales, former UN Secretary General and Nobel Prize winner Kofi A. Annan, and the last president of Czechoslovakia, Václav Havel. Professor Dan Ariely, lecturer in behavioral economics at Duke University, paid tribute to his research colleague. The ceremony marked the high point of the anniversary year of the Gottlieb Duttweiler Institute which was founded in 1963.

Sebastian Findeisen has accepted a position of tenure-track assistant professor at the University of Mannheim. Moreover, he has been offered a post-doc position at UC Berkeley. He will now move to Berkeley, and then start his position in Mannheim in the spring 2014.

Andreas Mueller has accepted an assistant professorship at the University of Oslo. He will start his position in September 2013.

Kevin Staub has accepted a position at the University of Melbourne. He will start his position in October 2013.

We congratulate our graduate students on their excellent placements!

"There is no good unless one does it." A saying by Erich Kästner that sounds simple at first glance, but it should be considered as a complex phenomenon. While human beings want to show moral behavior, they often choose to act selfish, believing at the same time that they are acting moral. Jakob von Uexküll, founder of the Right Livelihood Award, and Ernst Fehr venture an outlook of the future. Together they will discuss the aim of their foundations and how they intend to foster a sustainable development of the society. The discussion will be moderated by Haig Simonian, a former correspondent of Financial Times. You are warmly invited to the public event which takes place on Thursday, September 26 at 6:15 p.m. in the main auditorium (KOL G-201) of the University of Zurich. Please note that the discussion will be held in German. For further information please contact Aileen Zumstein.
Event details

Amidst the current financial and economic crisis, the debate about the future of “western capitalism” is of central importance. Most people accept that missing, inefficient, or misguided regulation was in large part the cause of the last financial crisis. So the questions that need to be answered are: What role should the state play? What constitutes fair and efficient regulations for the financial markets? Which unofficial rules, norms and individual or group behaviors are important for the smooth functioning of societies and economies?
The Forum for Economic Dialogue 2013 on «Fair and Efficient Rules for Capitalism» takes place on Monday, November 18 from 09:00 a.m. to 07:30 p.m. in Zurich. It offers an ideal platform for academics, business people, public officials, and interested citizens to engage in an exchange of knowledge, latest insights and ideas. The event will start with a keynote lecture by Alan Krueger (Princeton) and will be concluded with the Zurich Lecture of Economics in Society on "A Capitalism for the People”, delivered by Luigi Zingales (Chicago).
The detailed program together with further information on the speakers and the option to register will be available on the UBS Center webpage

How do we make decisions? Why are managers usually too optimistic? Human irrationality is Kahneman’s great theme. His ideas have had a profound and widely regarded impact on many fields – including economics, medicine, psychology, and politics.
Prof. Daniel Kahneman, one of the world’s most important thinkers and recipient of the Nobel Prize in Economic Sciences, gave a public lecture at the University of Zurich on April 16, 2013. The event was organized by the UBS International Center of Economics in Society.
Artikel auf NZZ online
UZH News

Why is cheating so addictive? What makes creative minds lie more often than others? And how come deception is most appealing to us if others benefit from it? „The (Honest) Truth about Dishonesty“ is the title of the newest book of Prof. Dan Ariely and was the topic of his lecture that he gave on Wednesday, April 10 in the main auditorium of the University of Zurich.

The Workshop on Early Childhood Development took place on Friday, March 22nd 2013, and was organized by the Department of Economics. The purpose of the workshop was to assemble experts in the field of childhood development and to discuss recent advances on the role of motivational and self-regulation skills for human development. In an interactive setting, first James Heckman presented a toolkit for the integration of empirical data into the theory of early childhood development within the life-cycle.
In the following, the speakers Gabriele Öttingen, Daniel Houser, Melissa Libertus, and Armin Falk presented data on their own projects on childhood development and motivational training. Seong Moon and Tim Kautz, both graduate research assistants with Prof. James Heckman, presented empirical evidence on reasons for success or failure of past developmental projects. As a last speaker, Daniel Schunk presented “KIDS-WIN”, a current randomized controlled intervention in collaboration with Ernst Fehr, conducted in primary schools to shed light on the psychology, the neurobiology, and the economics of human capital formation.

Prof. Fabrizio Zilibotti's CEPR Discussion Paper on "Offshoring and Directed Technical Change" (with Daron Acemoglu and Gino Gancia) has been reviewed in the January edition of the The Economist.
Business Insider

/>Prof. Fabrizio Zilibotti gave an interview to Morgenbladet (11.01.2013) after his speech held in front of the Standing Committee on Finance and Economic Affairs of the Norwegian Parliament (Storting) on 10 January, 2013 on "China: Past, Present and Future".
read the interview